WINNERS OF THE CULTURE ONLINE INTERNATIONAL AWARD HAVE BEEN ANNOUNCED

WINNERS OF THE CULTURE ONLINE INTERNATIONAL AWARD HAVE BEEN ANNOUNCED

On November 15, the 2022 Culture Online International Award winners were announced.

For the third year in a row, the Culture Online Award aims to recognize organizations that implement cultural projects in an online format or use digital technology, thus contributing to the development of the cultural industry, society and the humanitarian space, creating new models of publicity and accessibility of culture. The award is organized by the Russian Cultural Foundation.

This year, 319 applications from 53 regions of Russia, as well as from Belarus, Kyrgyzstan, Kazakhstan, Armenia and Switzerland have been submitted on the Culture Online educational digital project website.

“The Culture Online Award was first held during the pandemic, when the need for transition online became extremely urgent. This is the third time we are meeting today for the award ceremony for the best online cultural projects – time has shown that this is still relevant, in demand, and finds a large-scale response from creators, cultural institutions and audiences,” said Elena Golovnina, General Director of the All-Russian Public State Organization Russian Cultural Foundation. 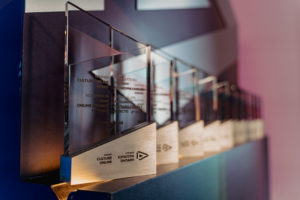 The winners in the Best Online Project 2022 category are as follows:

1st place: VKontakte Museum Night 2022, by the VKontakte social network. Special thematic sections were added to the VK Videos and VK Clips platforms, featuring exclusive lectures, tours and interactive workshops. The annual event in the new digital format, which brought together more than 100 leading cultural venues in Russia, reached every part of the country.

2nd place: Accessibility Squad, by the Association of Creators of Inclusive Media Projects Life in the Dark. The Project’s team selects the best solutions for creating an accessible environment and produces videos about theaters, cinemas, museums, and parks, which can be visited by people with reduced mobility. Every person with disabilities can learn something valuable from these stories.

3rd place: Teen Art Awards, an international prize in contemporary art for teenagers, established in St. Petersburg by the art.coordinate Foundation for the Support and Development of Contemporary Art. Teen Art Awards is not just an award aimed at identifying outstanding and young artists but also an online platform that promotes the professional growth and development of unique and ambitious creative teenagers thanks to the support and assistance of the art community.

The TASS Russian news agency’s Twelve Friends of Jung project won in the Best Educational Project category. Jung’s ideas were reflected in the works of many psychoanalysts and cultural scientists, but one of the most popular was the theory of the twelve archetypes by Carol Pearson. Her approach was primarily used among marketing professionals, but in recent years this typology has become firmly embedded in literary criticism, screenwriting, games, film, and entertainment industries. With the participation of psychotherapists, marketing experts, cultural scientists, literary scholars, and screenwriters, a podcast was created, uncovering all the milestones in the dramaturgical development of a character following the so-called hero’s path. 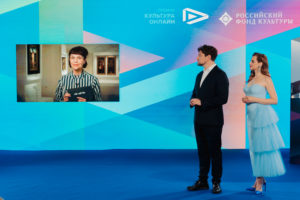 The winner in the category for Best Collaboration was the All-Russian Festival Relay of Kindness – 2021, timed to the International Day of People with Disabilities. During the festival, institutions of culture, education, social services, and non-profit organizations annually hold in-person and online cultural and leisure events for people with disabilities. A special guide is posted on the website of the project organizer, as well as in cultural institutions, social and rehabilitation centers, specifying target audiences for the events. Organized by the St. Petersburg State Specialized Central Library for the Blind and Visually Impaired.

This year, the most successful project in the nomination for Best SMM Campaign was the Universe of Mikhail Vrubel project by the State Russian Museum. During the campaign, branded counters with QR codes were installed in the Russian Museum, directing to a dedicated VK Clips section on Mikhail Vrubel’s art, and a series of online tours of the exhibition was published on the RuTube channel of the Russian Museum, as well as in social networks (Telegram, VKontakte).

The winner in the category Best Live Broadcast was the Urals Music Night festival, created by the Association of Musicians of the Urals. This is one of the largest music festivals in Russia, which has been held annually since 2015, and in 2020 the festival became one of the most significant events in the world. In 2022, 5.5 million viewers around the world watched the festival online.

The Amber Room. VR Version, a project of the Tsarskoe Selo State Museum-Reserve, created with the support of PJSC Gazprom, received the highest prize in the category Best IT-Solution for the Cultural Field. The Project is an accurate interactive model of the world-famous interior of the Catherine Palace. What makes this Project unique is the difficulty of preserving the amber pattern, taking into account the reflective properties of the stone. Visitors can view the exhibits as closely as possible in the virtual space and learn about the interior’s history, techniques, and materials.

The Don State Public Library Project, “Book Renaissance. 360 Exhibition“, won the award in the Cultural Gamification nomination. This project allows visitors to touch and see a book treasure that has passed through centuries and has not lost its beauty to this day. The Project invites visitors to see digital interactive doubles of the 6 most striking and recognizable publications from the collections of the Don State Public Library, created using the technology of photogrammetry and the game engine Unity. The Expert Council decided this year to add a nomination Special Jury Prize: For Devotion to Culture and award a project demonstrating why it is so important to keep the link between generations and to cherish the heritage of the creators of the past. The winner in this category is Classics and modernity. Donetsk Republican Art Museum and Contemporary Artists For this Project, artists were invited to create canvases inspired by paintings from the museum’s collection.

The Culture Online Award also features an additional nomination: the Special Prize of the Russian Cultural Foundation, and this year was no exception. The winner was the media project MultiZnania from the animation studio Multogram, whose animated videos introduce the literature and history of the country humorously. These socially significant web series are produced in the edutainment format – learning through entertainment.

The broadcast of the award ceremony for the best digital projects in the field of culture was held on the online platform “Smotrim”, Culture.RU, as well as on the resources of Komsomolskaya Pravda and the “Culture. Petersburg”.