The MolOt Youth Department of the Composers Union

A series of video workshops for musicians from the MolOt Youth Department of the Composers Union of Russia and the MolOt Ensemble of St. Petersburg.

Episodes contain a detailed analyses of various difficulties while performing music and ways to note and to articulate them. Workshops give an insight to individual techniques, and the way videos are arranged allows you to follow the notes on the screen. 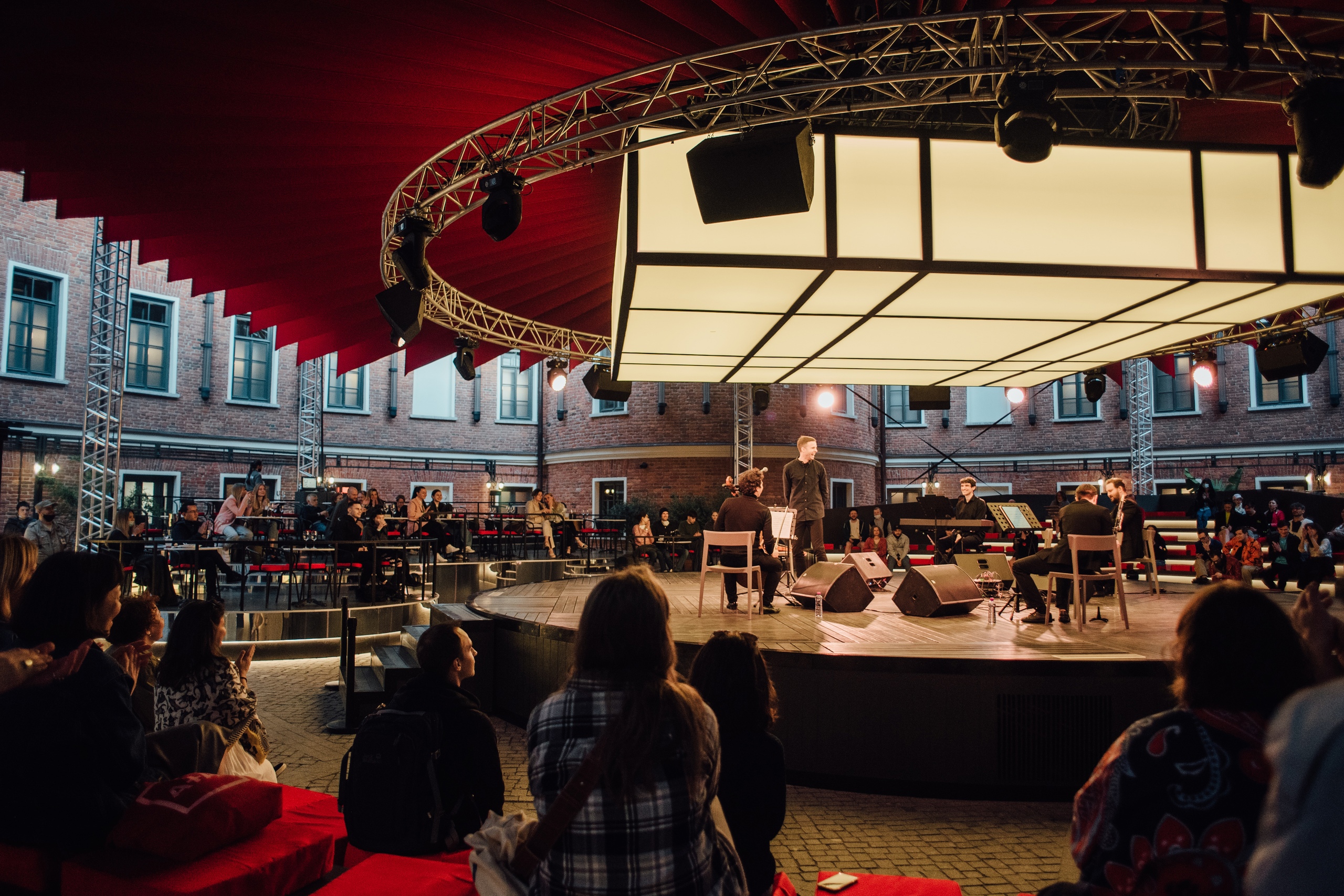 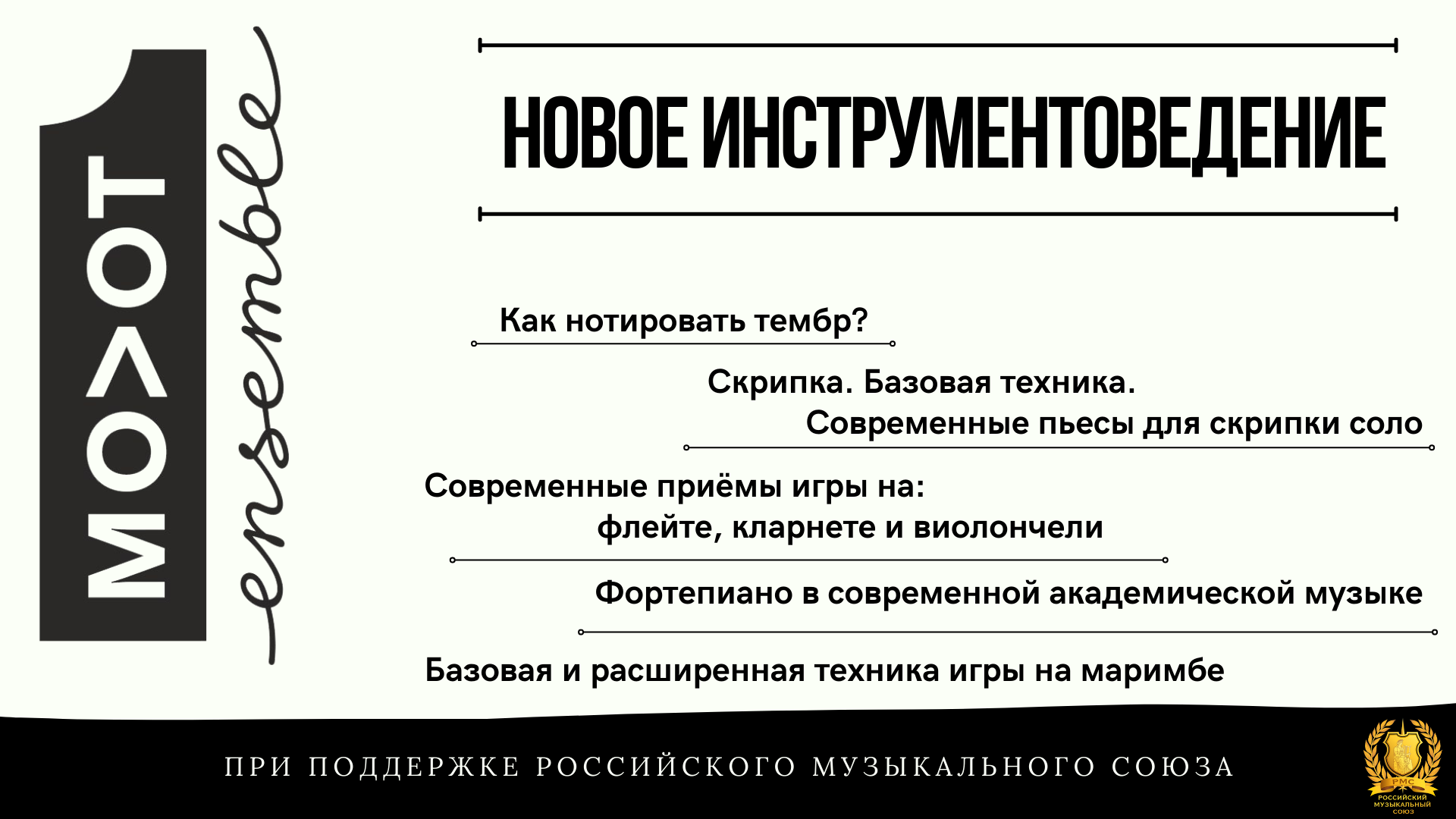 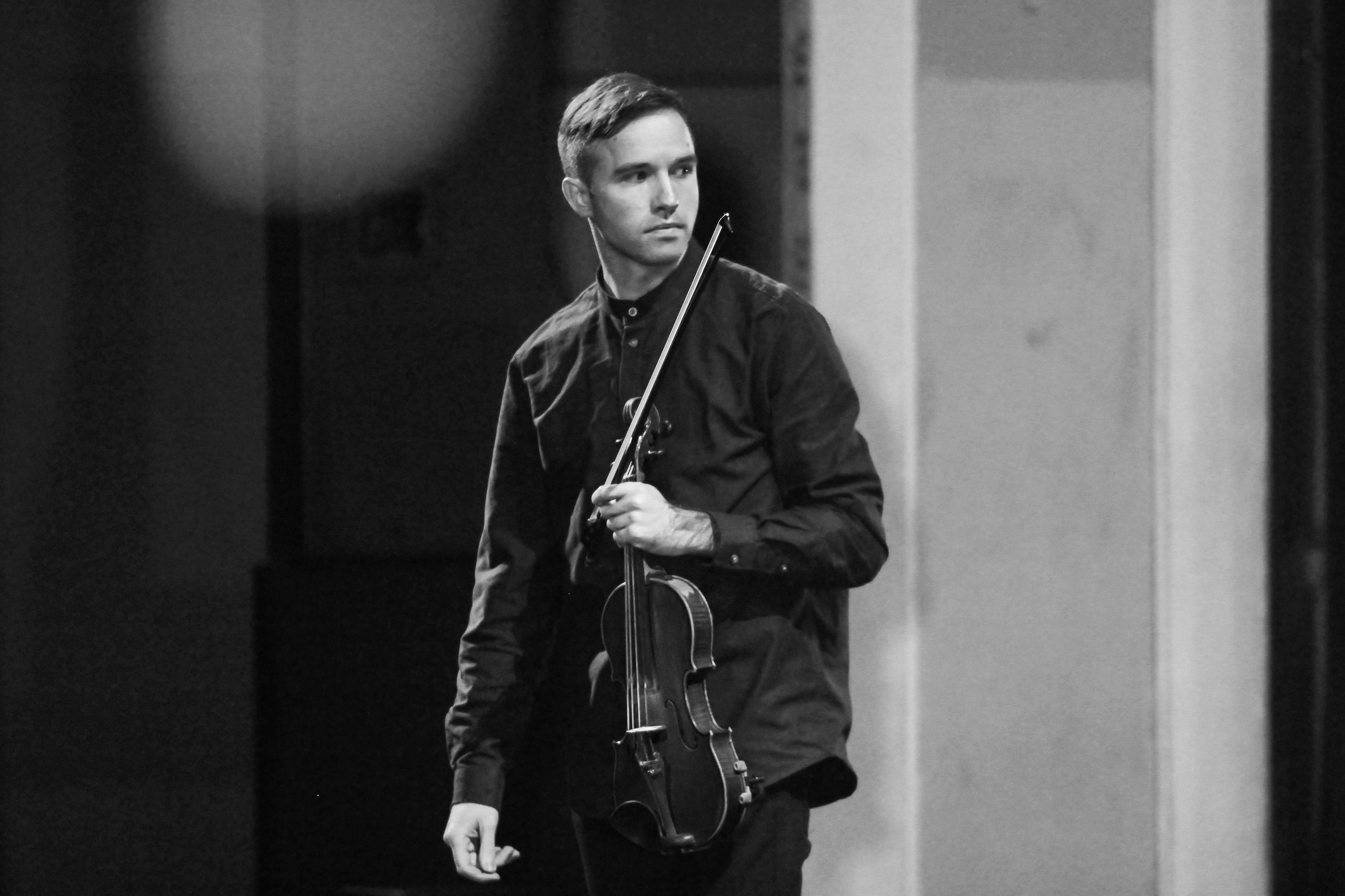 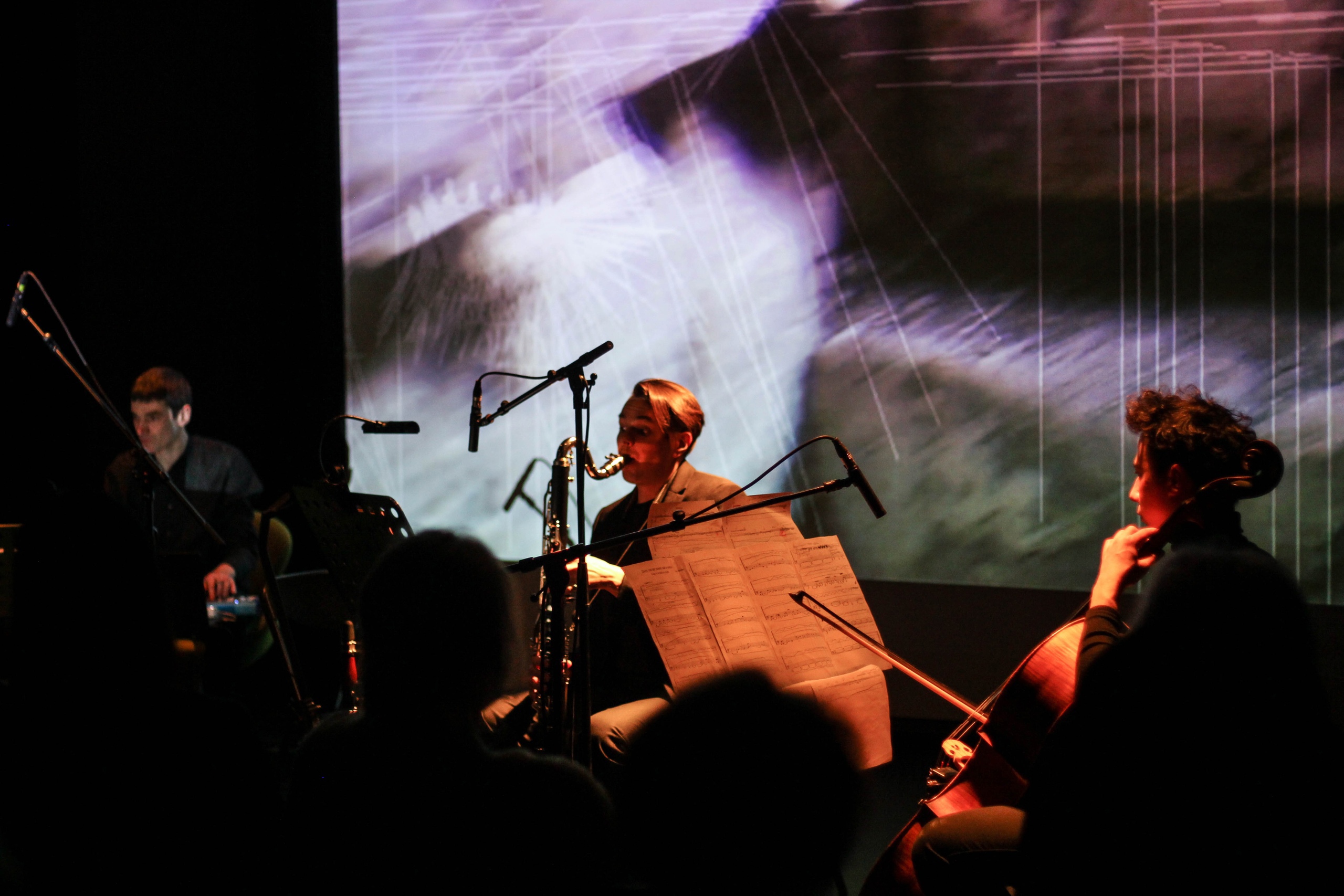 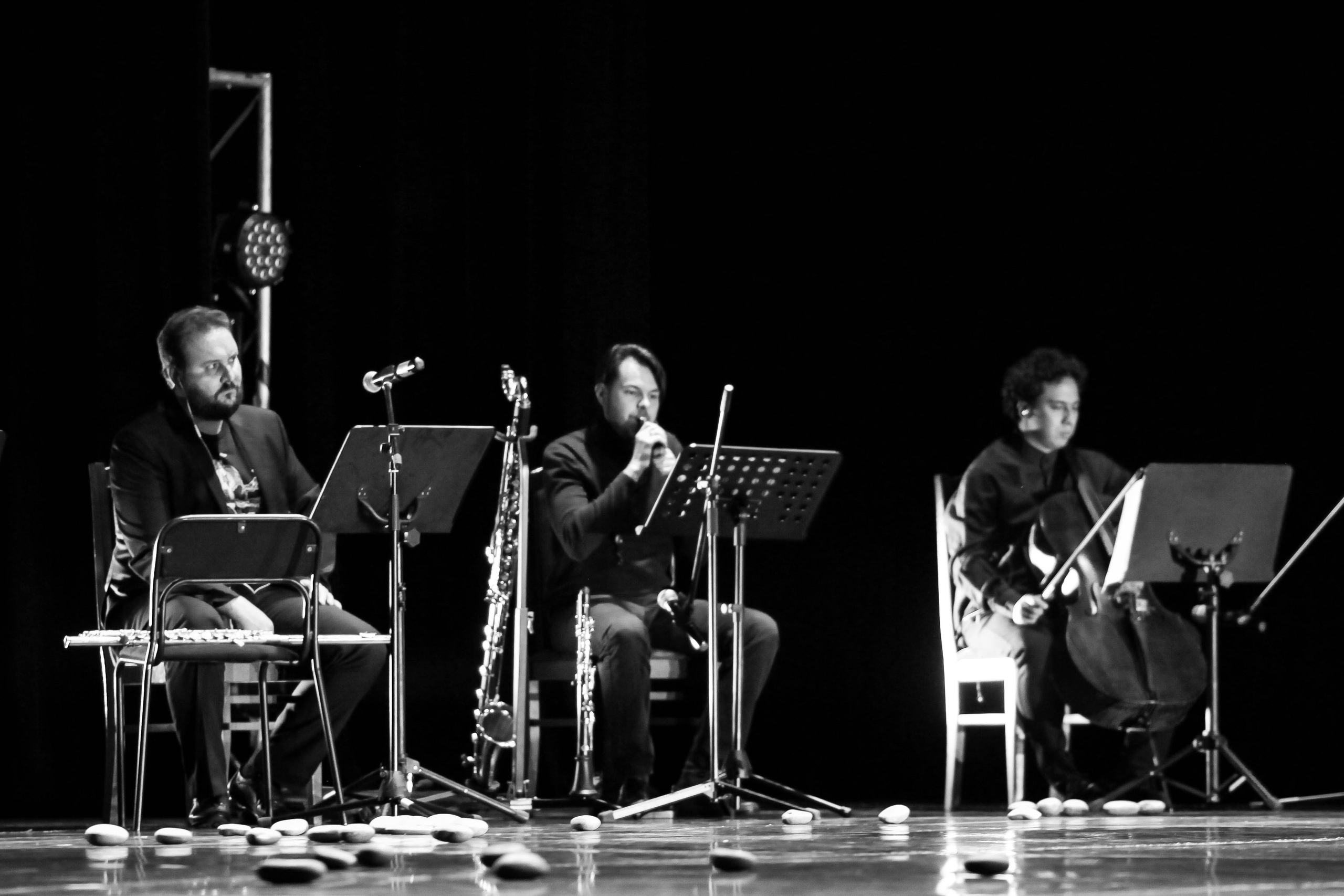 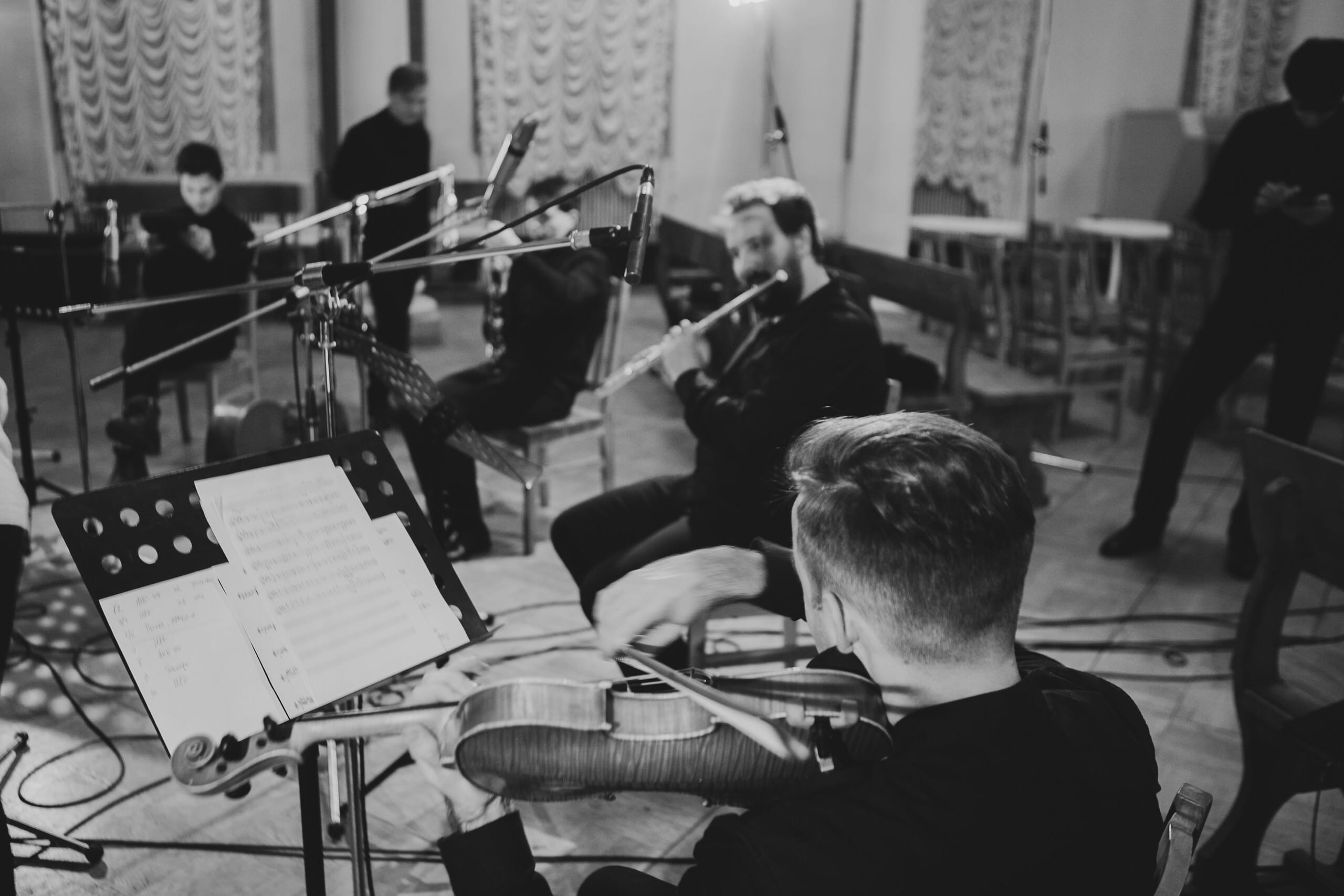 The course can be useful both for tutors and students of conservatories or art colleges and for inquisitive listeners and music critics - videos make it possible to scrutinize the tricks of various performing techniques: glissando, slap, microchromatics, flageolet, jet whistles and complex piano playing techniques. Musicians of the MolOt Ensemble explain the need for creation of such a workshops series by the lack of development of many important musical techniques in the 21st century. The first season of the project, recorded in 2020, includes 6 videos.

In 2021, the second season is being released — three new episodes are already available, four more are planned to be released soon. Techniques described by the musicians of the MolOt Ensemble of St. Petersburg in their workshops of the New Instrument Studies course make it possible to expand the repertoire of orchestras and ensembles mastering the works by composers of the 21st century. See episodes on YouTube channel of the MolOt Ensemble of St. Petersburg.

IT TURNED OUT THAT MOST DIFFICULT THING FOR PERFORMERS WAS... TO SPEAK! 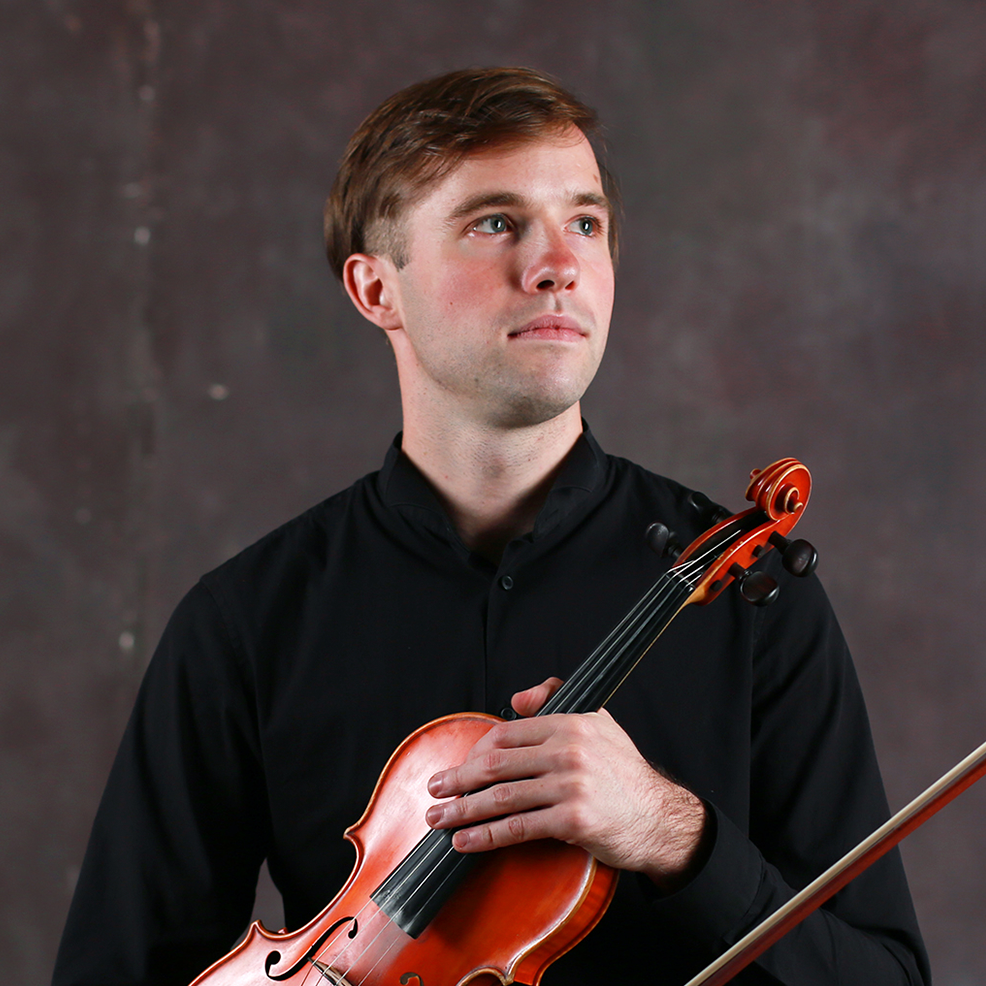 violinist and composer, Chairman and Director of the MolOt Ensemble of St. Petersburg

It's simple - we relied on our practical experience. We just got tired of explaining to young composers how to record this or that technique of playing on the instrument, what was the correct name for this or that sound. Composers shouldn't be blamed for that. There were simply no manuals on new instrumental studies in Russian. Some videos by various Russian instrumentalists have been released over the recent years, but we wanted to make a manual. So that it was systematic, visual and easy to use. Finally, so that the visual imagery did not cause disgust. You must admit that it is quite difficult to perceive a video shot in "selfie mode" (unless it is the concept / artistic idea). So, we tried to make the highest quality content within the budget that we had. Pandemic was the main push towards the implementation of the idea — thanks to lockdown, we had a lot of time to think over the script and musical extracts, to shoot, edit, prepare the scores. The Russian Music Union supported our idea and its implementation. We are very grateful for this.

What hidden pitfalls should be kept in mind?

In our case, some videos had to be shot over and over again. Not because of musical extracts. It turned out that the most difficult thing for the musicians was... to speak! To tell about your instrument and playing technique in simple words. Scripts were rewritten, complex phrases were removed. It was hard not to mumble and so on, and so on. Preparation of the scores turned out to be uneasy task as well. You want to master music scoring from A to Z? But you only have scanned copies of poor quality with some interesting scores and unwilling to spoil the video due to these scans. Then you have to sit down and type the most difficult graphics.

When we started the project we thought it was more for composers. But it turned out to be very relevant for performers. People started to write to the musicians of our ensemble something like: "So, I watched the video, I press the keys, but it doesn't sound like it should". I'm even glad to know that skeptics have finally realized that performing modern music requires a high-class mastery of a musical instrument. Listeners did not stand aside either. The video has a lot of views now. There is a foreign audience as well: as it turned out, despite the abundance of materials on modern techniques of playing the instruments, there was a lack of organized information in such videos. We have received a lot of positive feedback from foreigners who have watched videos with English subtitles.