Pushkin National Library of the Republic of Mordovia (Saransk)

The project humorously reveals to the viewer and the reader what is left behind the scene in the life of a library. Videos once again emphasize the importance and significance of reading.

Various videos of the Bibliobackstage online project have been posted on the social networks of the Foreign Literature Department and on the main website of the Pushkin National Library of the Republic of Mordovia starting from January 31, 2020. 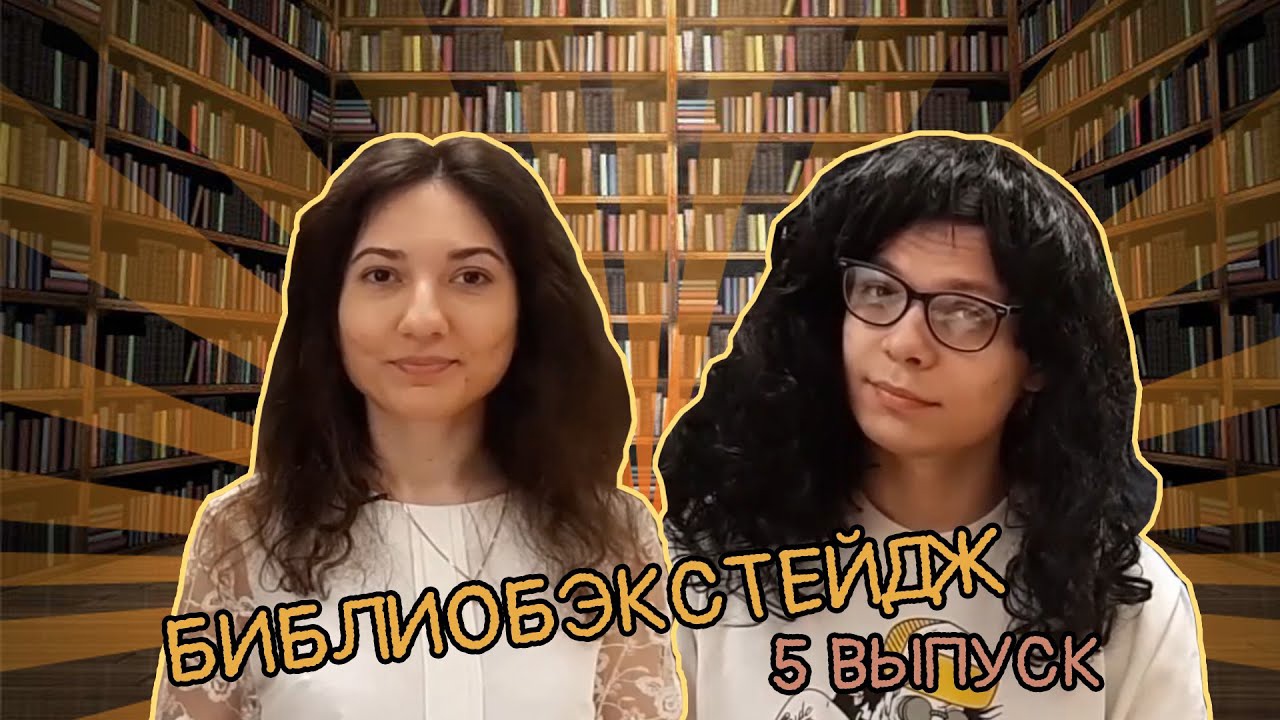 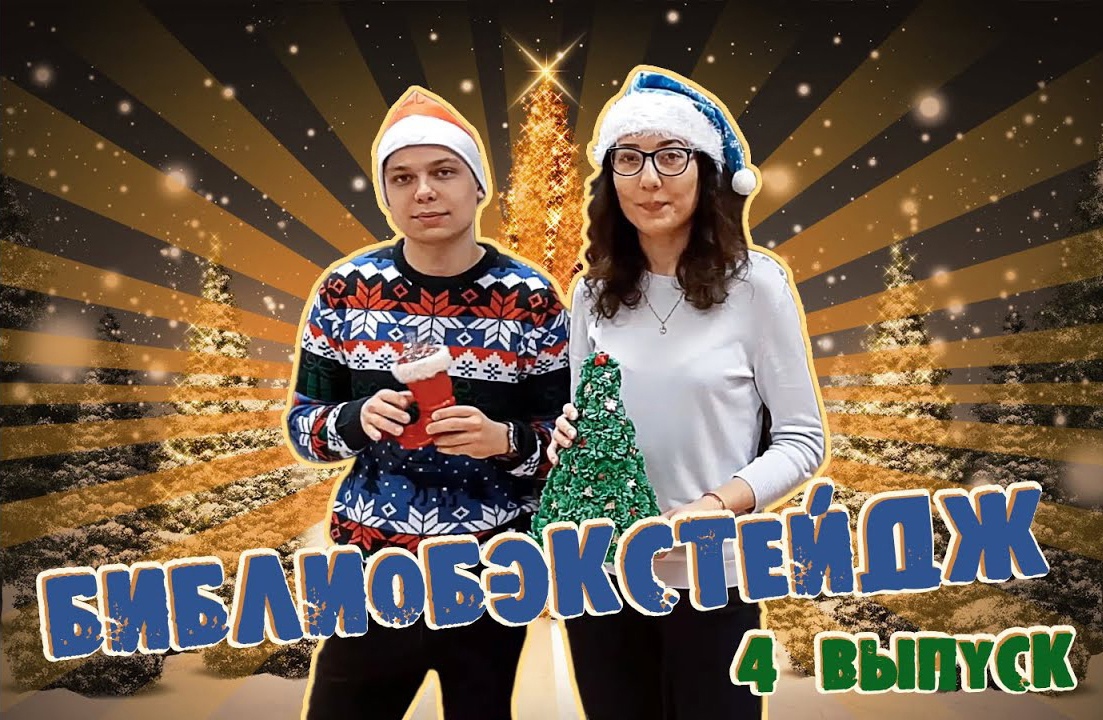 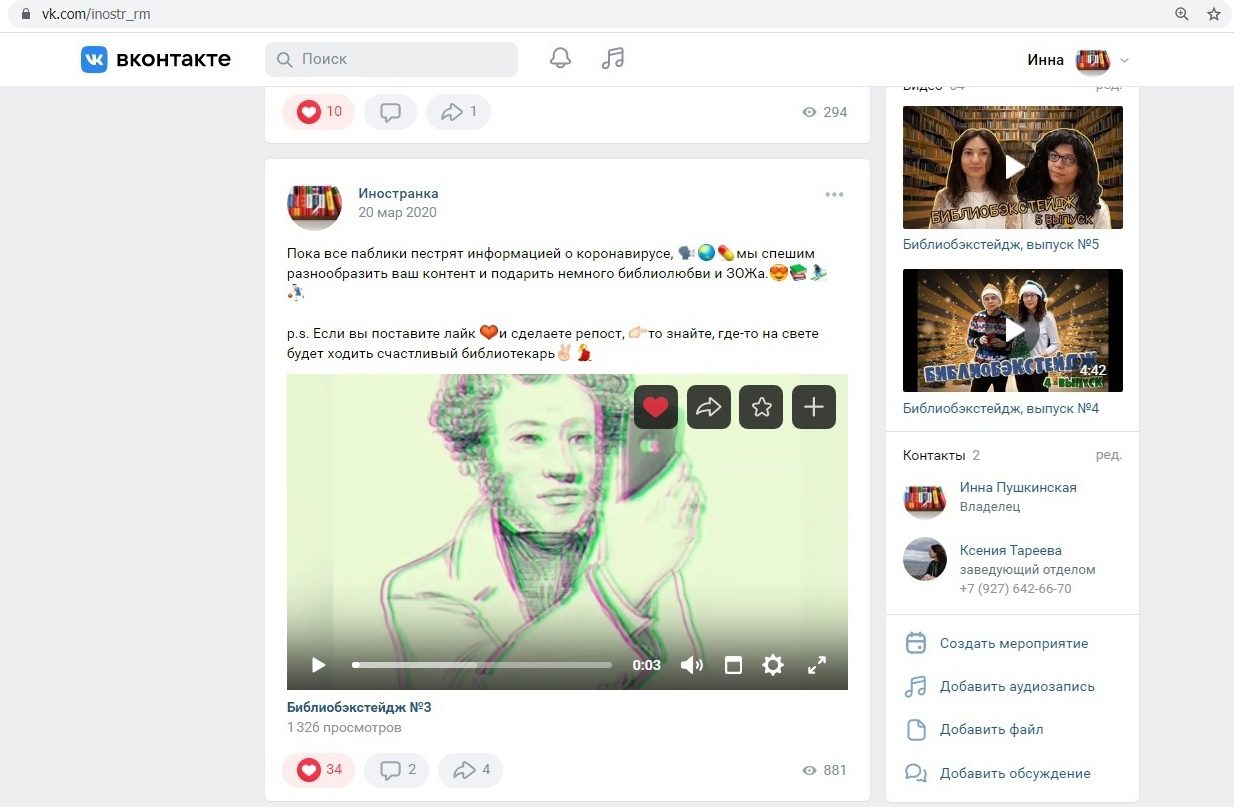 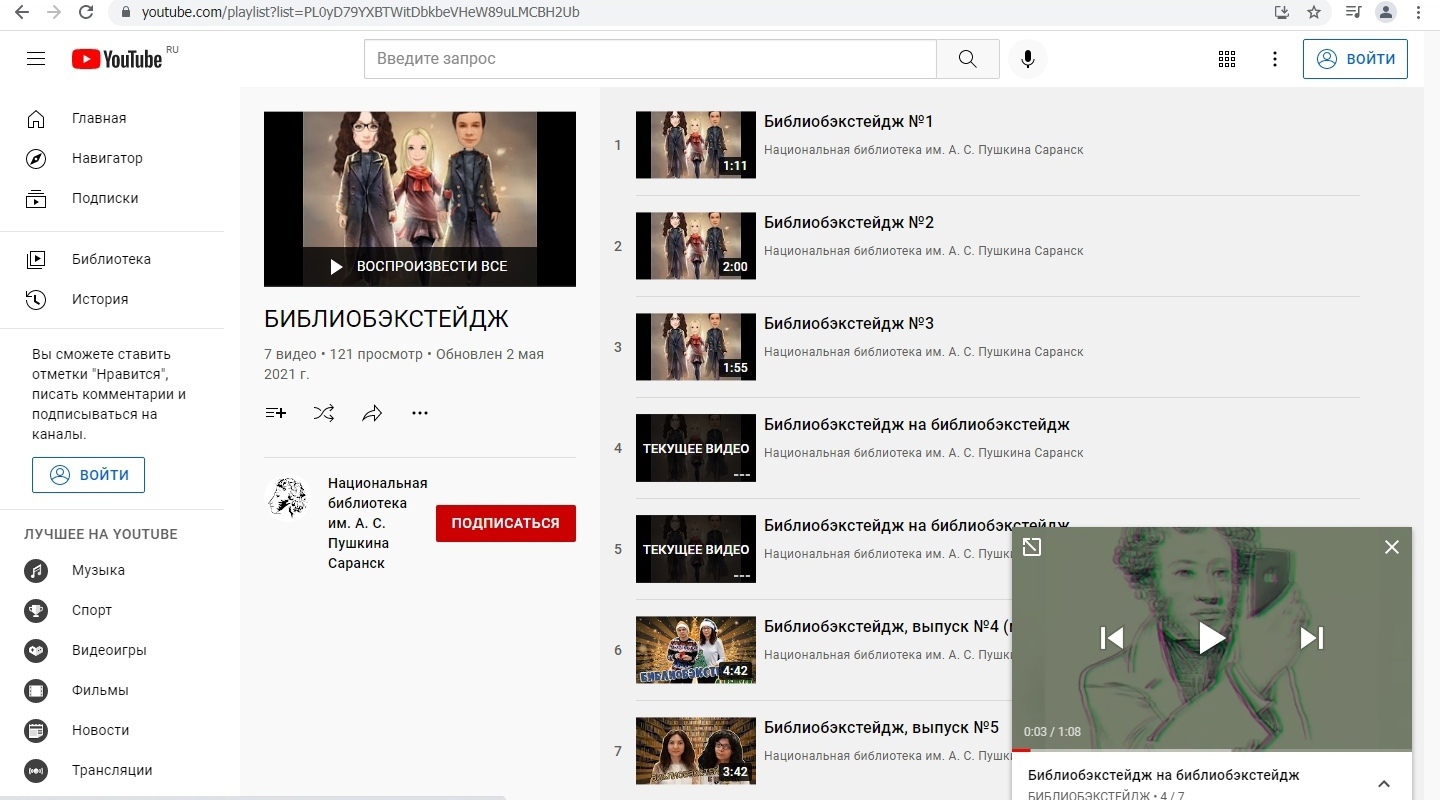 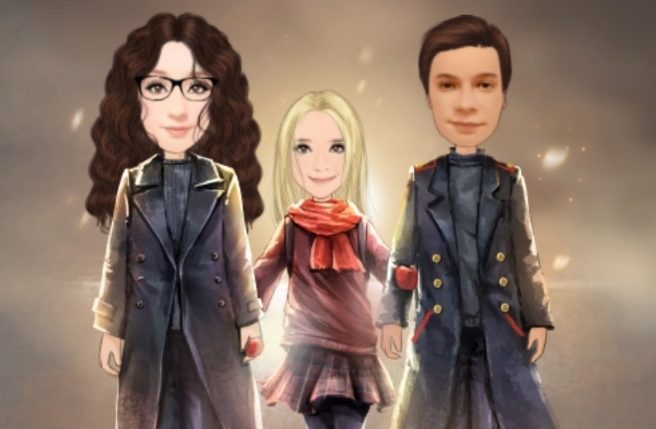 Librarians talk about the institution's current life in a positive way, show lots of interesting festivals, exhibitions, meetings and concerts where young professionals and all types of readers are involved. Employees challenge embedded stereotypes, engage in activities, visit librarian gym arranged as part of the Healthy Library Project with a view to maintain both mental and physical fitness. As of today, 5 episodes have been released. They show library staff destroying several myths, telling about the longest word in Hungarian; showing outdoor activities and themed events, sharing new foreign words.

In the sports episode, project creators tell how they spend their free time playing volleyball, skiing, taking part in librarian relay races and give a historical background on the first Olympic Games. After the third episode, "Bibliobackstage on Bibliobackstage" video was released where you can see behind-the-scenes of the project in the most positive sense. A video with a well-known motive "Last Christmas", composed of the sounds of the library, was quite uplifting in the upcoming New Year and Christmas. Audience also got to know about an UNusual day of the librarian. 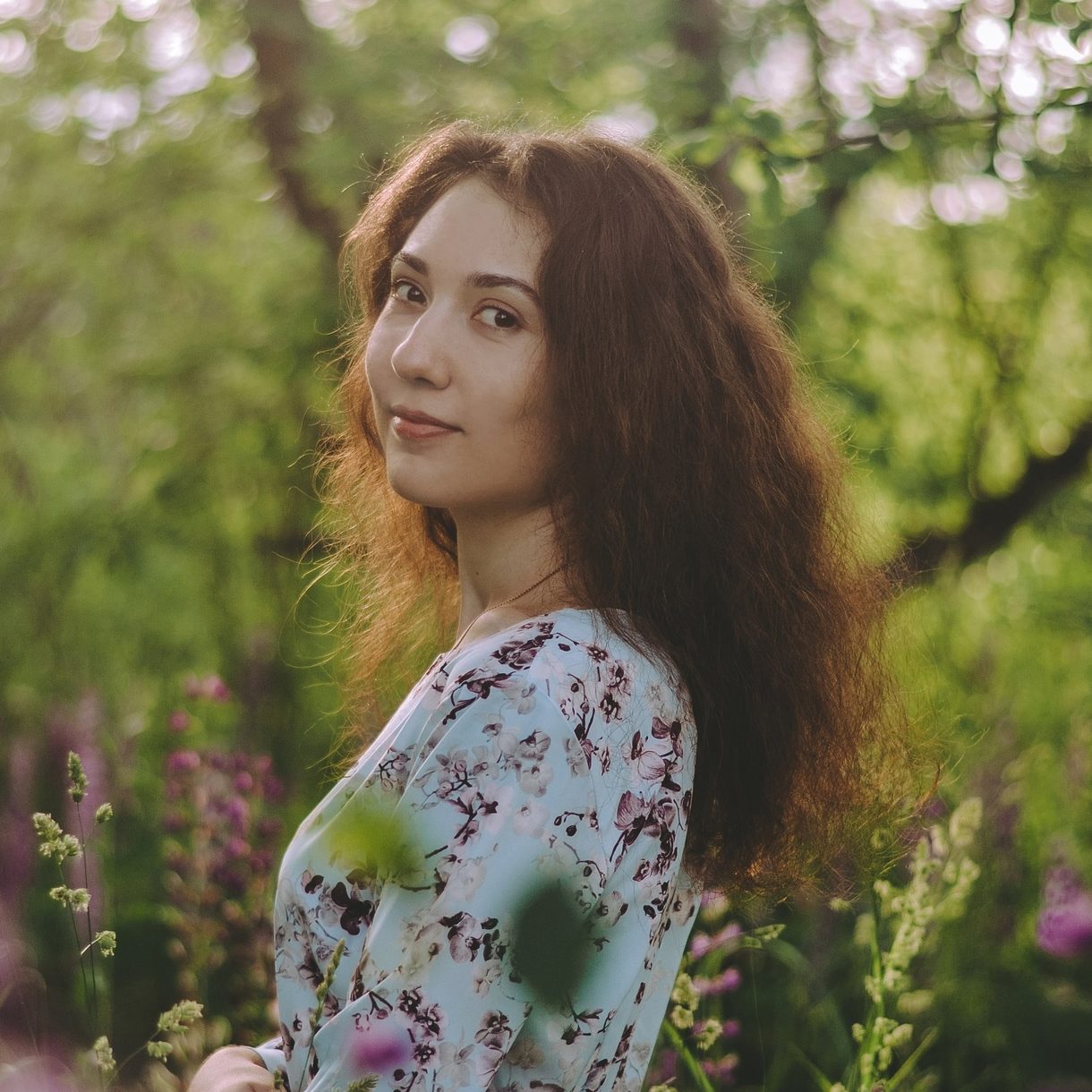 The best ideas arise spontaneously. Ours came right in the middle of the work day. Yet there is nothing better than a librarian telling about the "temple of books" with stereotypes and myths behind that have not lost their strength over so many years. We decided to prove that the library is an innovative cultural center. We didn't have to dwell on the name and the content of the first episodes — we set out for the shooting armed by note pad, pencil and phone. What helped us to produce high-quality content was our skillfulness in using FL Studio digital audio workstation and sequencer for music creation, in music making by recording and mixing audio or MIDI material (music made up of the sounds of the library), in using Davinci Resolve workstation for video processing, color correction and creating visual effects, and in various applications for easy and convenient downloading, processing and editing of photos and videos on VKontakte and Instagram (FastSave, Avatan, InShot).

The most difficult thing for our team was to predict the reaction of the audience. You never know if a particular project wows, whether it takes fancy, will humor and objective be clear, same with the references to famous personalities, films and music. We tried to take what is known by everyone. Something to convince (the importance of reading), something to dissuade: library is a place for creative, young and promising people, it's a hive of activity where hearts are burning with ideas. It's hardly ever quiet here and you can only see hair buns and glasses on stage during performances.

Project has an educational function. Leaving stereotypes and myths behind, it tells people about the library, its events, daily activities and funds that keep real treasures and rarities available to all readers. Librarians who speak foreign languages tell about different facts and words that will be useful to anyone who wants to know and speak 30 languages of the world, and the foreign literature department helps in that. Along with the educational function, the project is designed to turn people to reading, to remind them of the importance of literature and books in our time. A team is needed for any idea to be implemented, and the key to success is in the hands of young, creative, positive librarians who love their work: Anna Aizatova, Maxim Kovlyagin, Ksenia Tareeva. Value of a book as an artifact continues to grow though newly-embodied and the technologized material embodiment - gadgets - also contribute to the return of the value of reading as a process of cultural consumption.